Well, we made it folks! We are currently camped out in the Tetons Visitor Center typing up a quick update.

Let’s just preface by saying that when we went to pick up our permits the ranger warned us that you DEFINITELY need an ice axe for the final leg of your trip. In fact, a ranger even wrote a note on our permit confirmation we got in the mail to the same affect. Maybe it was an “ignorance is bliss” thought process, but we did not ask any further questions. Let that all sink while you read on.

We started our backpacking trip on Tuesday with a big day right off the bat. We estimate our hike that day was about 17 miles or so. Nothing like kicking off our hiking season with a bang, huh?! The trail was GORGEOUS! With all of the lush greenery and colorful wildflowers, it felt like Snow White and the Seven Dwarfs should be frolicking in a field every time we rounded a corner. Absolutely fairy tale-esque! Do fairy tales include wading through painfully cold water though? Because we definitely had some of that too. Lots of snow to trek through as we crossed Mt. Hunt Divide and Fox Creek Pass. T-shirts and snow…love it!

With only a couple of miles left we stopped for dinner by Marion Lake only to be joined by a couple of hungry marmots. (Pesky buggers literally snuck right up behind us!) Needless to say, by the time we made it to the camping zone on Death Canyon Shelf (quite a name, huh?) we were beat! It was definitely a long day, but well worth it when we made it to camp before dark and got to enjoy some beautiful views of the big kahuna itself, the Grand Teton. 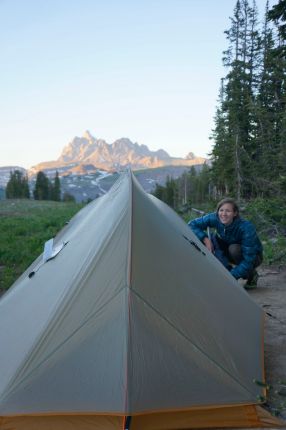 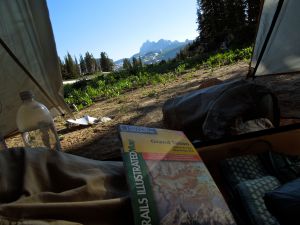 It’s not everyday you wake up with craggy peaks right outside your front door, but Wednesday was one of those lucky days for us. We had a fairly short day ahead of us (about 10 or 12 miles) so we enjoyed some much needed sleeping in. (Come on people…we are still on vacation after all!) Hitting the trail late in the morning, we hiked through the incredible Alaska Basin, losing the trail only once or twice for a short bit due to snow and mud. Barbara wiped out only once on the mud…had to happen at least once, right? The big push of the day was the hike up to the top of Hurricane Pass. (We can now verify that Hurricane Pass is aptly named. WINDY!) The views were out of this world!

We were finally up close and personal with the Tetons themselves. Given the opportunity, we probably could have spent the better part of the afternoon up there soaking in those majestic mountains! We hiked down the other side of the pass back into the lush forest to out secluded campsite where we washed up in the ice cold creek and hit the sack early.

The plan for Thursday was originally to hike up and over into Paintbrush Canyon, but our plans were foiled by snow. We had ice axes along for the ride, but unfortunately carrying them does not do much good if you have not used them much before…ever! Did not seem like the opportune time or place to learn. You can bet when it came time to make the call to proceed as planned or reroute we were regretting not asking any more questions to the ranger in order to better estimate how our abilities stacked up to the conditions. Bummer dude! Skunked by our lack of preparation! We decided to hike out Cascade Canyon (incredible by the way) and do a big day hike into Paintbrush Canyon the next day. (Tomorrow! Woohoo!)

The day did not end on a bad note by any means though. As always, everything seems to happen for a reason even if it does not necessarily go according to plan. Since our backpack was not a loop, we had to hitchhike back to the White Rascal. (We figured she was probably getting lonely after all this time.)

(P.S. Somewhat unrelated, but check out the photos of the obstacle we had to cross in order to get to our campsite the night before our backpack started. Vans are AWESOME!)

And boy, oh boy, did we catch a ride! A friendly vagabond, much like ourselves in some respects, hit the brakes and we piled into his van/home for the short trip back to the car. He introduced himself as David and proceeded to fill our ride with colorful stories we will no doubt remember for the rest of our lives. (Understatement!)

Here is a little sampler to give you a better taste of our chauffer David:

Meeting David was an AWESOME highlight of our trip so far!!! (Here is your shout out David! We are so glad we met you! We hope to have stories like you one day too!)

So to sum it all up, the Tetons in a glance: These craggy peaks are almost menacing they are so beautifully powerful. They strike the perfect balance between majestic and mysterious. If mountains could talk, maybe they would say, “Muah-ha-ha-ha!” But since they cannot, we can only assume.

That pretty much brings us to where we sit now updating our communication line to the outside world. Dinner, White Rascal camping, and then Paintbrush Canyon tomorrow before we head on the Yellowstone!

SIDE NOTE: Check out our pictures of the day and state line photos in addition to the ones we post directly on the blog stream. Also, if there is anything you would like to hear more about, drop us a note!