We will be back Olympic! We promise! But for now it is on to the next leg of the trip! We hit the ground running bright and early to make one more lap through Seattle. We may have opened a can of worms on Beach 4. After starting to compile “The Lost Files” on those sandy shores, we decided a little side trip back up to Seattle to re-snap a few photos of the vibrant flowers, fresh produce, and fish throwing that make up Pike’s Market would be time well spent. Our suspicions were confirmed as soon as we ventured into the colorful, noisy, over-stimulating market. Awesome! To top off a fantastic Seattle day, we popped into Elliot’s Bay Bookstore. Again, it would have been way too easy to get lost in the rows and rows of books housed in this bookworm’s Mecca. Alas, we bolted out of the city limits beating a little afternoon traffic towards Mt. Rainer National Park. 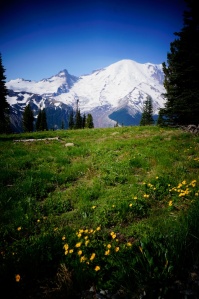 We spent the night right outside of Rainer and woke early enough to catch a glimpse of this behemoth of a mountain before the clouds shielded it from view. Wow! That is a serious chunk of rock! It’s absolutely breathtaking! A very well timed side trip if we do say so ourselves. Since Rainer was a last minute decision for a little sightseeing excursion, it was soon time to get back on the road and head on to Mt. St. Helen’s Vistor Center…or so we thought.

After a close call with the gaslight, we pulled into the Mt. St. Helen’s Visitor Center parking lot only to find out from a not-so-helpful ranger that we were not only at the wrong place to pick up our permit, but that we were on the completely wrong side of the mountain. It was a race against the clock, but we made it to the permit registrar right under the wire and picked up our permit for the next morning. Whew!

The morning kicked off with a little uphill, followed by another steep incline, and then a little later there was a little more elevation to gain. Needless to say, but we will anyways, an elevation gain of 4,700 feet in only 4.5 miles is a lot! We quickly reached treeline and started our scramble up the boulder field following the trusty posts marking the trail. The final stretch composed of a massive scree field covered in ash from the 1980 eruption was a bit of a slog, albeit a worthwhile slog.

Standing on the ridge of the giant crater and looking down only to see the ever-growing lava dome in the center slowly building a new summit, it was absolutely mind-blowing to think about the top 1,500 feet of this once snow capped mountain exploding 50,000 feet into the air just 30 years ago. Wow! Peeling our eyes away from the steam vents releasing the intense heat from this active volcano, we were able to fully take in our phenomenal surroundings. Mt. Rainer, Mt. Hood, and Mt. Adams stood tall in each direction above the clouds that blanketed everything below us. Those are some seriously impressive mountains! 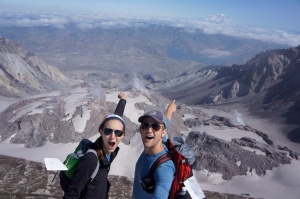 It’s all downhill from here. This turned out to be more of a challenge than we anticipated. The ashy rock made both the scree field and the boulder field fairly slick. (A lack of balance did not seem to be helping the matter either. Go figure.)

The White Rascal boogied to Portland where we were lucky enough to crash with our friends Leslie and James. Amazing food, hot showers, clean sheets, Olympics viewing…are we in Heaven? We keep warning them that if they don’t give up the perfect host act, we may never leave! Naturally we had some research to do determine just how awesome Portland is so we mad to make our way to the Portland Beer Fest, which we were coincidentally in town for. A stop at Powell’s Bookworld rounded out our research and the results are in…Portland is pretty stellar!