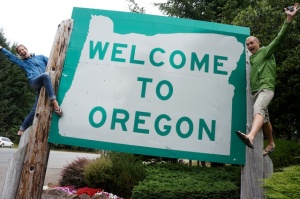 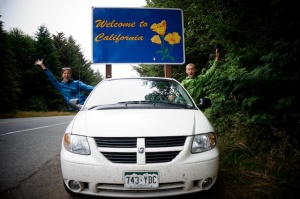 Redwoods – The land of big trees! Last September when we swung through Redwoods National Park we spent the first couple of hours driving around wondering where in the world the park entrance was. It was not until we caved and eventually stopped to ask that we learned that Redwoods is unlike many other parks that have a main entrance station and vistor center. Rather, Redwoods is a conglomeration of National and California State park land and lacks these typical park staples. Now that we were older, wiser, and clued into this good-to-know tidbit we wasted no time and navigated the White Rascal right into the heart of the park for a scenic drive through the Jedediah Smith forest and a hike to the Boy Scout Tree. Surrounded by towering, thousand-year-old trees reaching hundreds of feet into the air and huge, lush ferns carpeting the forest floor it did not take long to forget we were in fact still in the 21st century and not in the land before time about to come face to face with a T-Rex. We reached our destination and all prior thoughts that it was somewhat stupid to hike all this way just to see a tree when we were already in the midst of such giants immediately slipped away. This was a decidedly ENORMOUS tree!

The clouds lifted just in time for dinner overlooking the craggy beach below presenting a very different Redwoods than we had experienced last September in persistent fog. A beautiful sunset to cap off the night was really more than we could ask for, but Redwoods definitely delivered. No complaints here! 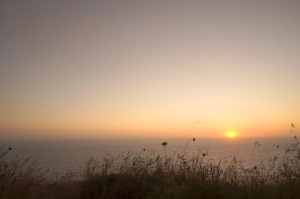 A nice lazy morning sleeping in afforded us the opportunity to really express our inner vagrant-selves as we tumbled out of the White Rascal around 11am in a popular parking lot surprising a couple of unassuming hikers. Class acts! Soon after, we were on our way and down to business as we started on our indisputably not busy schedule for the day. A nice little hike to stretch the legs led us to Fern Canyon where we again hiked through thick forests of monster trees and abundant vegetation until we reach the canyon itself. The name did not deceive! It really was a canyon covered in ferns as far as the eye could see. There was a trickle of a creek running through the canyon as well which made for some clever balancing on the occasional rock and log to avoid wet shoes if at all possible. I am happy to report that clearly our Olympic watching paid off as we tapped into our inner gymnast and scored what would be impressive balance beam scores. (Rio 2016!)

On our way to find fire wood, we recalled the tacky drive-thru tree we stumbled upon on our last Redwoods venture. It seemed only appropriate that we rinse and repeat. I mean, for only $5 an all-you-can-drive opportunity is a steal of a deal! We got our money’s worth squeezing the White Rascal through the cutout in the trunk of the massive Redwood at least a half dozen times. Jackpot!

A gourmet dinner complete with garlic toast (Caps off to Ron the chef!) on a bridge to nowhere reminded us just how lucky we are to be where we are and be doing what we are doing. The bridge was wiped out by a “river on a rampage” in 1964 during Christmas week, but thanks to the neat architecture a portion was saved and turned into a great historical overlook point/dining room. A toasty fire, a couple of good books, and an oceanside soundtrack marked another night on the books. Life is rich! From here it’s on to the Lost Coast Trail. Guess it’s high tide we get our hands on some maps! (Pun intended.)