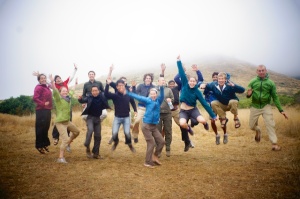 With the Lost Coast trail and a long day of hitching under our belts, we finally made it to our Point Reyes camp out; a last minute, spur of the moment decision to join our really good friends (and San Francisco crash pad hosts) Beth and Trevor along with a heap of other folks ready for some beach time. It was not until we made it to the Visitor Center before closing by the skin of our teeth that we realized we knew little to absolutely nothing about where we were supposed to be meeting everyone.

“Who’s name is the permit under?”

“What is the name of the campsite?”

Needless to say, the ranger at the permit desk was less than pleased with our lack of information and his lack of wanting to be at work after hours (go figure), but he was extraordinarily nice and helped us out anyways. Once we eventually found the trailhead and made the short hike into the campsite we basked in the novel opportunity to socialize with other people, ate heaps of grilled meat, and enjoyed a smoky fire on the foggy beach. (We were also graced with the very entertaining presence of a stumbling drunkard. All we were missing was the popcorn.) Feeling full, warm, and happy we turned in for the night. The next day brought more fog, which was perfect for our lazy morning filled with bagels, bacon, and homemade muffins. This new group of friends sure knows how to go “glamping” (glamour camping) when the opportunity presents itself! This was definitely not our standard camp out…but that made it all the better! It was a total blast! 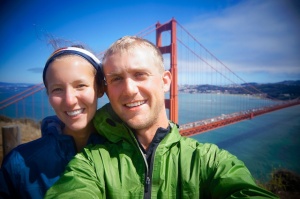 Time to hit the big city! We cruised into the Bay Area around mid afternoon. (Please note that when we say “cruised” we mean sat in stop-and-go traffic.) First stop…the Golden Gate Bridge! Basically, we turned the corner and BAM! there is was! Big, red, and so perfectly San Francisco! We took our time snapping a few photos, especially since parking was a nightmare and we were in no hurry to rush out of there after a hard won battle for a spot. This bridge is a truly impressive feat. In fact, it’s so humungous that it takes so long to repaint one side of the bridge in the famous International Orange color to prevent corrosion that by the time they finish it is time to start on the other side again. This constant maintenance sure keeps the painters in business! 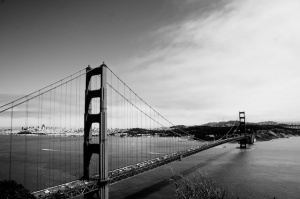 We made it to Beth, Trevor, and crew’s house in Palo Alto, the land of tech startups, just in time for more delicious food. Seriously people…if the amazing hospitality we are getting conditioned to does not stop soon we are going to start knocking on random strangers’ doors expecting to be fed like kings and put up for the night with no questions asked. Truly though, a night of Olympic viewing and catching up with great friends was just what the doctor ordered.

By the time the next day rolled around we were ready to do some serious chores primarily focused on John Muir preparation. Let the food shopping extravaganza begin! There is really nothing more fun than walking into a grocery store and needing to find the most high calorie junk food available and then deciding that you need at least two or three of those! It is especially amusing to watch other shoppers’ reactions as you discuss whether or not those chips or these candy bars have enough calories in them. If you ever get the chance…do it. If for nothing else than the pure joy of watching the bemused look on people’s faces…it is worth it! 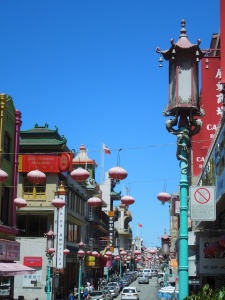 When the time finally came to explore the city, we got an early start and took the train into San Fran. We went searching for the renowned Chinatown and let me tell you that you cannot miss it! Full of so much color and noise, it is exactly what you would think it would be! Shops filled with kitchy toys and other useless knick knacks immediately grab the eye. You think you could star wide eyed at this stuff all day asking yourself, “Who in their right mind would buy some of this stuff?” That is until you watch someone get out his or her wallet. (And until you remember that the last time you were here you were in elementary school and truly in Heaven wanting to buy everything!) It gets better though! Step into one of the many market shops lining the streets and the fact that you are in the largest concentration of Chinese culture outside of China itself is affirmed as you realize that of all of the unmarked packages the only thing you even remotely recognize is the shark fins. And if that was not enough to get your mind reeling, there are signs everywhere saying “No Cameras of Recording Devices on the Premises.” Makes you wonder… 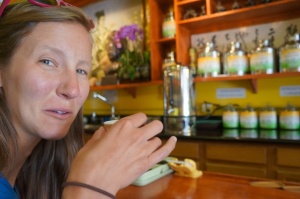 On our way out of Chinatown, we stopped into a local tea shop for their free tasting. We sipped the boiling hot beverages out of teeny tiny cups that look like they were made for dolls and tried to finish them before the server came around to pour the next sample. (Judging from her pace, either these were intended to be scorching hot shots or the Chinese have tongues that can withstand fire.) Seeing as neither of us are tea drinkers and liken it to drinking dirty water, we were finished after about four samples. That said, it was a very fun experience and had we liked tea, I bet it would have been quite good! 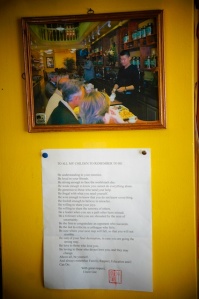 We wandered over to Little Italy just in time for lunch. Finding the place with the longest line, we knew we were in for a treat. Let’s just say that I have never eaten a sandwich the size of my thigh before, but I’m sure glad I have now. It is amazing what rustic bread and fresh ingredients can do for your energy levels. 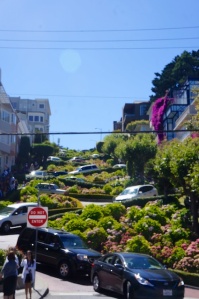 We left the park where we dined in fine Italian style and walked off our sandwiches towards Lombard Street, also known as the Crooked-est Street. While San Fran is well known for its steep city streets, this one takes the cake. In just one city block there are eight, flowerbed lined switchbacks! Eight! While I pity the folks who live there due to the high volume of both foot and auto traffic resulting in what I can only imagine is the near hopelessness of backing out of their driveways, it was pretty neat to witness it firsthand. 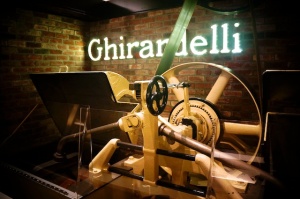 Just a little more walking and we made it to Ghirardelli Square, home of Ghirardelli Chocolate. Yum! We watched their original chocolate making machinery swirl the liquidy goodness in their ice cream parlor as we munched on our complimentary samples until we just could not take it anymore. We had to get out of there before they had to call someone to mop up our drool. Luckily Fisherman’s Wharf is right there too! We sauntered that direction and popped into a few of the art galleries along the way. They were filled with lots of great and masterful pieces of artwork in all styles, however, what really caught our eye was the Art of Dr. Suess exhibit. Apparently in his spare time Dr. Suess would create art in the form of drawings and sculptures. Once he died his wife, Mrs. Suess, released his art and it now tours the country bringing smiles to all those who have known and loved his books as a part of their childhood (and/or weddings in our case.) 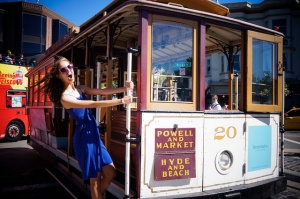 Next stop was a ride on the legendary San Francisco trolleys…or so we thought. We somehow missed the memo that you don’t just hop on one of these San Fran tourist staples. Rather, you wait in line for a couple of hours with hopes of snagging one of the coveted outer edge spots. Although I’m sure it is definitely worth the wait, we were trying to make it back to Palo Alto in time for dinner so we opted for the next best option…a photo with a trolley. Now we have a reason to come back though! 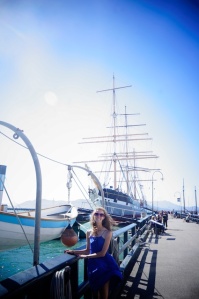 With a bit more time to kill now that we were trolley-less, we thought we would just continue to meander around the wharf for a bit…until lo and behold we found the National Maritime Museum run by the National Parks Service bobbing right in front of our eyes. They have lots of old ships from the early trading days docked on the pier for you to go inside and explore. We boarded the mighty Baraclutha and were immediately immersed in the history of the ship and the trade as well as the lifestyle of the captain and the crew. It was fascinating! Yet another unplanned scenario gone right!

After a spectacular evening with Beth and Trevor catching up, laughing, and planning future reunions it was time to bid the big city goodbye for a while. San Fran was a welcome change of pace from the normal rhythm of our trip and whole new adventure in its own respect. We are rested and ready to hit the dusty trail again…seriously, very dusty!

Check out the gallery below: