We found ourselves at Whitney Portal, the exit point of the John Muir Trail, with nothing packed but our food.   In Palo Alto, we had stuffed 8 days worth of food into our bear cans. Typically with a trip of this magnitude, we would have been packed weeks ago, but being on the road meant that this wasn’t realistic. So for about two hours on the morning of Sunday the 12th, we took over a couple of parking spots, spreading our gear out, going through mental checklists to be sure that we had everything we would need for the next nine days.  At this point in the trip, packing our backpacks has become almost second nature, and we felt confident we had everything we would need. 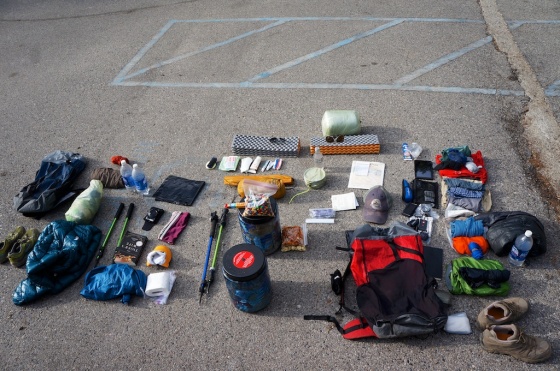 The hitch up to Mammoth Lakes went, well, without a hitch.   We stood patiently in the baking sun, thumbs up, and smiles on.   Kind people with cold air conditioners picked us up, and in a matter of no time we found ourselves at the base of Mammoth Ski Resort.   At Mammoth, the rain started to drizzle as we hopped onto the shuttle bus that takes hikers down to Reds Meadow, our starting point for this hike.

We claimed one of the first campsites we saw, as they all looked fairly similar- very large, not at all private patches of dirt.   The drizzle let off for a bit, and Barbara and I found ourselves sitting and thinking about the trip that lay ahead.

As we sat talking, I saw a hiker wander through the campground and up to the registration board.  As he came walking back by, I asked if he wanted to split the camp fee and use some of the extra space we had to pitch his tent.   No need for both of us to pay $20 for a campsite when there was enough space to pitch five or six tents.   As Bob sat down his pack to settle into camp, Barbara and I decided to wander around and see what the area had to offer.

After a short hike we found ourselves at the Devil’s Postpile National Monument.   We stood at the base of the rubble below the tall pillars of basalt, heads a little turned and mouths slightly open in awe…

The leaning towers of rock look as though they have been meticulously sculpted into hexagonal fence posts and then neatly stacked upright next to each other. Below the exposed face is a large pile of broken pillars that have fallen due to the freeze/thaw cycles that every winter brings.  An ancient glacier smoothed off the top of the Post Pile, leaving an exposed honeycomb pattern.  The whole place is just fascinating. 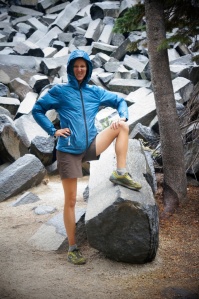 Back at the campsite we found Bob leaning casually against a tree, reading a book and staying out of the drizzle. Over dinner the three of us dove into great conversation that continued late into the night as we enjoyed a bottle of wine next to a small campfire.   Bob turned out to be one of the nicest people we met on the so far on this trip.  We share a similar life philosophy and outlook on travel, and for the first time in my life I think I fully understand the true meaning of kindred spirit.   Hopefully we will cross paths again with Bob sometime down the road.  With a bit of luck, we will be able to live a life as full as adventure and happiness as Bob has.

One thought on “John Muir Trail – Part One – The Wind Up”