The long haul flight from Sao Paolo ended in Johanesburg at the early hour of 7.  Normally, 7am is not too bad, but the jet lag set it as soon as we landed.   We filled our six hour layover taking turns taking  naps in our sleeping bag on a bench, as it was frigid in the airport, and we both were a bit worried about sleeping past our departure time.  A couple of close calls averted, and we caught our last flight to finally find ourselves standing on Tanzanian soil.

After exiting the plane at around 7 at night, we had to stop to get our tourist visa.  In the past, this has never been a tough task.   We filled out the paperwork the best we could, but found ourselves as the last people in line at the visa issuing office.   Giving our $200 to the Tanzanian government proved to be no easy task.   The coordinator took one look at our paperwork and shook his head.

“Where are you going in Tanzania?”

“Dar Es Salaam is a big place, where are you going in Dar?” he replied.

“To Aika’s house” we replied with shrugged shoulders and a smug look on our face.  Our friend, Aika, who grew up in Dar, had agreed to pick us up.

He laughed and said that he needed better information.   Like a real address.  Unfortunately, we had not written down her phone number.  Besides that, we didn’t have a phone.  It is tough to  go backwards on the technology timeline.  I have gotten very used to travelling with a smartphone.  Normally, I would easily be able to look up her phone number, and give her a call.   Without the luxery of a smartphone we found ourselves with our hands tied, and no way out.   The coordinator showed no mercy.

If you do not know where you are going, I can not let you in to the country.

About this time, a kind lady who had overheard our situation whispered to us.

“Just write down that you are staying at the Serena Hotel.”

We can only assume that is where she was staying.  Without any other option, we did it.  No address or anything.  We handed our forms back to the coordinator.

“Is this a lucky guess?” he asked with a smile and a short laugh, finally letting down his stern persona a little.

Barbara and I both waited on baited breathe.

“Ok, get over there and wait for your name to be called.”

Travel Lesson Number Two: Know the details of where you are staying when you land in a foreign country.  And if you don’t, ask to copy someone else’s paper.

After waiting 45 minutes for everything process, we ran out to see if Aika was still waiting for us as we were 30 minutes overdue.   Luckily for us, she greeted us with a smile and a hug. 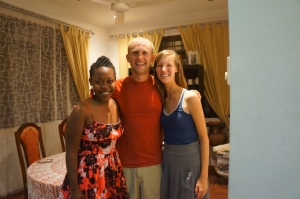 We met Aika through Barbara’s sister Libby last summer.  Aika and Libby were housemates in college at St. Olaf, and they visited us on a road trip to Colorado.   We reached out to her on Facebook while in Brazil (yup 24 hours before our arrival), to see if she would be around.   We thought maybe we could catch up, grab a bite to eat.   No that’s not the way Tanzanians roll.   Aika showed up at the airport, waited 45 minutes for us to get through customs, drove us to her parents house and put us up for 2 days.  She and her family could not have been more gracious hosts.

They fed us, helped us sort out a cell phone, and our bus tickets to Moshi.   Instead of spending an entire day checking off chores, we were done in 2 hours.   What to do, what to do.

Well, on the way to the cell phone shop, Aika pointed out a artist market on the side of the road.  We wandered through, practicing our bartering skills, and tried not to spend too much of our souvenier money on the first day.   While there, one of the shop keepers took us out back to the workshop area, where the craftsmen were working.   It was quite a treat to see the sculptures and wood carvings coming to life.   We ended up taking home a small carving and a oil painting. 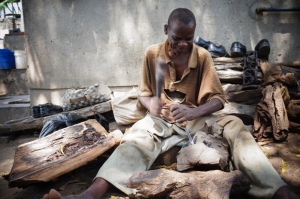 From the artist market,  we flagged down a bajaj- a three wheeled cart powered by a little motorcycle engine.  We caught a ride out to White Sands Hotel.  Upon arrival there was a sign that said “The only thing we overlook is the Indian Ocean”.   We quickly paid a $3.25 cover fee and found ourselves on a shwanky private beach with thatched roof cabanas overlooking a super blue Indian Ocean.  Unfortunately the tide was out, so there was not too much swimming to be had, but Barbara and I still very much enjoyed soaking in the sun and eating lunch.  This place was incredible. 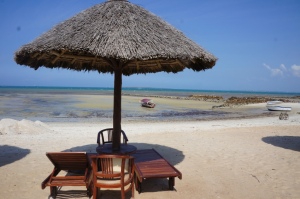 After getting more than our share of lazy, we caught another bajaj back to Aika’s home.  Everyone was still out at work, so we decided to set out on a short run.  We had spent a lot of time on planes, and not much time stretching our legs.  As we jogged through the hot and humid afternoon, we got many, many funny looks as we paced through a part of town that doesn’t seem to see too many Americans out running.   Funny stuff.   If only we had pictures.

The next morning was an early one.   The bus was to depart at 6, meaning we were up at 445.  AIka, being the incredible host that she is, woke up and drove to the bus station, without a hint of complaining about the early hour.  As we approached the chaotic bus station, we found ourselves in a knarly traffic jam at the 540.  Hard to believe that this many people were awake and on the road at this hour.   As the car sat, idling in stand still traffic, Barbara and I both had that sinking feeling in the pit of our stomach- would we miss our bus?

As 6 grew closer, we crept up to the entrance of the bus station.  With no parking options, Aika had to send us on our own to find our bus.  How hard could it be?   We hugged her good bye, and rounded the corner of the bus station building.

This place was total pandemonium.  People running everywhere, yelling, pointing, yelling some more.   There must have been 30 or 40 coach buses all lined up, all going to different places.   Where was ours?   We literally ran down row after row, looking for the bus with the words “DAR EXPRESS” written down the side.   I glanced at my watch.  5:55.   Panic was beginning to set in.

Last bus, last row, all the way in the back.   As we went running past, the driver saw us with our large backpacks, and yelled out, “Moshi!?  Kili!?”

Thank goodness.  We made it.