Our alarm did not even have to beep twice the morning we started our Kilimanjaro trek. Our eyelids popped open and we were up, backpacks strapped on, ready and waiting for our van. Imagine two excitable kids on their first day of school — bags packs, shoes tied, anxiously waiting for the bus. Right on schedule (nothing short of a small miracle for Tanzania) we were greeted at the hostel gate by our guide, Prosper, and our assistant guide, Brayton, for our 45 minute drive to the Machame Gate entrance to Kilimanjaro National Park. 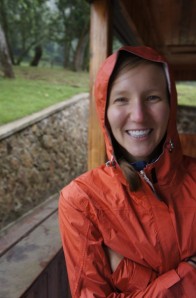 We were shuffled into a sort of tourist waiting area, sort of like how farm animals are herded into a small pen, and told to wait there until our guide came back to get us. They told us that this was so that we could stay in the shade while the guides got their team of porters assembled and packed up to go, but please take note that it was not sunny at all. In fact, it was rather cloudy with a cool drizzle keeping the temperature borderline cold. In reality, we interpret this waiting zone to be a safe place where the guides feel they can plant their clients and trust that all of us bonehead tourists can’t possibly get lost wandering around. In all fairness, they might have a point. 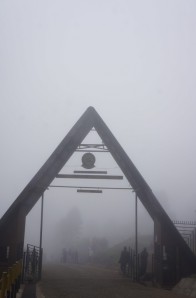 Eventually, Prosper came back to fetch us and we officially signed into their registrar. We were very careful to make sure we knew our passport numbers since we knew that this information was needed for registration. Or was it? Seeing as we overheard another guide tell her group to simply make up a nine digit number, we are not so sure of the necessity of this piece of information. Regardless, we were officially at Kilimanjaro as of that signature! 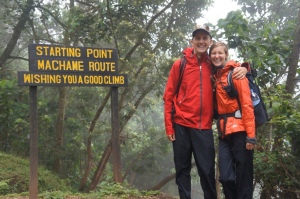 It was time. While Prosper stayed back at the gate to take care of a few more guide logistics, we took off with Brayton. We had 4,000 feet of elevation to gain before we reached our campsite for the night so Prosper figured that we had better get a move on and that he would catch up to us soon enough. Well, things did not go exactly according to Prosper’s plans. We made great time! Feeling fit and already acclimatized from our John Muir Trail hike a few weeks ago, we flew up the trail. (Our best guess is that the few weeks in between we spent doing close to nothing physical served as our highly effective tapper.) 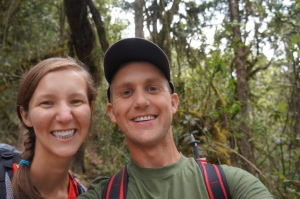 Chit chatting with Brayton as we went, it was not too long before we were hiking right alongside the porters. Watching them carry these gigantic duffel bags, water jugs, and wicker baskets tied shut with twine on their backs, shoulders, and heads was amazing! There must be something in the water, because they are absolutely super human! (Maybe that is why we are told not to drink the water here. Perhaps it does not have anything to do with getting sick, but rather they do not want us to catch onto their secret elixir. Just a thought.) Thoroughly entertained between gawking at the porter balancing act and learning Swahili phrases from Brayton, we made it to the lunch stop in what seemed like no time! We devoured our box lunches of egg and beef burgers, chicken wings, bananas, and muffins and were soon powered up for the rest of the day’s hike.
The trail was incredibly gentle and in just a few more miles we had made it to camp. We looked around and soon realized that the only other people at the Machame Hut campground were porters setting up tents. We were the first people there! While signing into the hiker log (which is something all hikers are required to do once they reach each campground at the end of the day for record keeping purposes) we checked the time and realized that we had cut the estimated hiking time for the day in half! We also noticed that Prosper was still nowhere to be found.
Once the porters had set up camp, we climbed into our tent (the Taj Mahal in comparison to what we typically camp in) and began unpacking our few belongings and getting things settled. All of the sudden, we hear Prosper huffing and puffing as he finally catches up. He abruptly pops his head into our unzipped tent and between deep breaths and wiping sweat from his brow he unleashes a verbal lashing. Apparently we had been going way to fast for his liking. The saying on the mountain is “pole, pole” which translates to mean “slowly, slowly” with the assumption being that people must take this hike very slowly due to the high elevation and the resulting lack of available oxygen for your body. 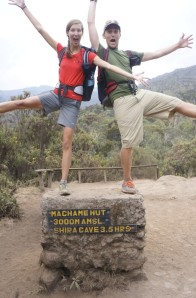 Prosper preached to us that we would never make the top if we insisted on wasting our energy going too quickly, especially on the first day. He also chastised us for not allowing the porters to do their job. By beating them to camp, they were not able to have things set up and ready for us when we arrived like they typically do. Basically, we were told that going forwards we were to follow step-by-step behind our leaders and not a step quicker…or else.
Our only response to all of this was, “We did not know if we could walk any slower than we were going. That is the slowest we have ever hiked. That is our ‘pole, pole’.” After a few minutes, Prosper settled down, made a few good humored jokes, and went off to recap with Brayton. Whatever Brayton said to Prosper must have helped. Perhaps he mentioned that we were continually leaving him behind and that clearly breathing too hard was not an issue thus far since we were were practically able to sing while hiking up those 4,000 feet to camp. Soon enough, Prosper came around and joined in our goal of being first to camp everyday. 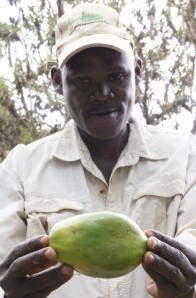 As if to celebrate a fantastic first day on our trek, the cloud layer we were sitting in for the majority of the evening lifted just after dinner revealing the summit of Kilimanjaro for the first time. With the sky on fire as the sun set, Kili was lit up by an almost heavenly light. Now if that is not motivation to get up and hike the next day, I truly do not know what is.
Check out all of the images in the gallery below: