Not that anyone is counting but…Ten hours on a steaming hot bus from Moshi to Dar es Salaam, one night in a not-quite-sketchy-but-definitely-dank hostel, and three hours on the 6am ferry from Dar to Stonetown and you can bet that we were more than ready to reach the shores of Zanzibar! We followed the mass exodus of people exiting the ferry and out the port gates, our eyes darting here and there and everywhere looking for our friendly host, Dulla.

Dulla was going to be our first CouchSurfing experience. For those of you who are not yet familiar with CouchSurfing, let me break it down for you in a nutshell. CouchSurfing is a website based community of travelers and willing hosts. Basically, you log on and search available “couches” to crash on all around the world. It is typically free (always a good price for accommodation) and a great way to meet local people who share similar interests and want to help you get an authentic experience by sharing their own knowledge and insider information. (Don’t worry Grandma…you can be very picky in order to make sure you stay safe.) While Dulla’s girlfriend Evy is an avid member of the CouchSurfing community, Dulla, however, was not a normal CouchSurfing experience in that he simply offered cheap, cheap, cheap rooms to travelers. Regardless, we now feel we can consider ourselves fairly adept at surfing couches.

Whew! Dulla was there just as he said he would be; waiting just outside the gate with our names on a piece of paper. We followed like obedient puppies as he navigated the twisty-turny alleyways of Zanzibar’s capital, Stonetown, to his building. Inside there was just enough room for the door to swing open before you walk straight into a stairway which is essentially a sturdy ladder. It did not stop there though. Once we reached the second floor we immediately climbed up another ladder-esque structure to the third floor where we were to be posting up. Did we mention it was cheap? We have both stayed in much worse, but either way you cut it, we got what we paid for in this case.

As is the nature of CouchSurfers, Dulla took a good two hours to show us around all of the hot spots in town, filling us in on little tips and tricks to Stonetown and making sure we had our bearings before he left us to our own devices. With Ron’s stellar sense of direction, it was not too long before we had a good feel for the lay of the land. (I contribute close to nothing in that department.) This in and of itself is a victory seeing as the streets of Stonetown are only wide enough for bikes or motorcycles for the most part. At times it seems that all those on bikes, whether powered with a motor or human legs, had a seecret vendetta against pedestrians as they come screaming around the millions of blind corners with only the quick honk of a horn or squeek of the brakes. Rather than the standard grid system, Stonetown seems to have been built on the swirly-jagged-corner-get-turned-around system. Besides its layout alone though, Stonetown is an exceedingly unique place. In fact, it was declared a World Heritage Site for its mix of Arabic, Muslim, Moroccan, and African cultures. The history is absolutely fascinating.

Once we had our bearings, we filled the day very easily. First stop was a delicious lunch of real Zanzibar cuisine at a local favorite Dulla suggested called Lukmaan’s. It was the best and biggest lunch we had ever laid eyes on for a whopping $1.75! From there we ventured to the old Slave Market. As a major port, Zanzibar had a thriving slave trade economy. In fact, this was the last remaining slave market in the world. We were even able to walk down into the holding area where they kept the slaves before the market. It was bone chillingly creepy. The conditions were absolutely unimaginable. Close to no light, stuffy air, ceilings so low crouching was not an option for even the shortest people…just horrid. To stand there knowing what torments had happened there was almost too much to really digest all at once.

On our way to the local market to pick up some fruit, we popped into some of the craft shops. Since our first day in Tanzania we had our hearts set on a very specific set of paintings. Herein lies the problem: No one seemed to have exacty what we were looking for. Either the colors were wrong, or the sizes were wrong, or the designs were off. (I know…tough life, right?) Also, despite their many claims, all of the other markets we had visited up until this point had not in fact been doing any painting themselves. Cue Mr. Niko! One of the shops we stopped in that lucky afternoon was that of Mr. Niko. We looked at his paintings and encountered the same issues as everywhere else with just one exception; he and his brothers could paint! After just a few minutes of chatting it was decided that he would custom paint exactly what we were looking for. We even got to mix the paint colors with him personally. And that my good friends is how we came to commission our first piece of art!

With the totally worthwhile Mr. Niko detour behind us, we made it to the market at long last. It was CRAZY! The smells and noises alone were enough to send anyone into over-stimulation mode. People shouting any number of sales pitches at you in any number of languages while the honking horns of the dala dala busses whipping past blasted their “get out of my way” warnings. The stentch of butchered meat mixed with dried seafood and over-ripe fruit filled the air while the flies swarmed everyone and everything in sight. For everybit overwhelming as this market was it was equally entertaining and fabulous! People dressed n any number of traditional garments, bananas the size of the Hulk’s biceps, personalities as colorful as the fruits and vegetables they were selling…it was so perfectly alive!

Before we knew it sunset was upon us. We climbed the steps the the rooftop of the Maru Maru hotel bar where we enjoyed their happy hour overlooking Stonetown and the sandy shores as the sun crept towards the horizon. It would have been a perfect ending to a terrific day…except it wasn’t over just yet. We still had to hit up the Forodhani Market! This is the local seafood market that happens every night after dusk along the shores of Zanzibar. It is quite the spectacle. You can eat yourself absolutely silly on close to nothing, trying everything from shark to “Zanzibar pizza.” And that is just what we did. We ate so much we practically had to roll home. (Good thing those ladders were so sturdy!)

Night came and went which meant that it was time for our spice tour! Zanzibar is famous for its spice exports. In fact, most of the world’s cloves come from Zanzibar.  A few minutes after we climbed into the van that was supposed to be taking us to the spice farm we began to doubt the legitimacy of the tour we were on. We spent the first half hour or so picking up and dropping off our guide’s friends around town and running other errands, none of which was explained to us. This is a real concern on the island due to the prevalence of touts and other people selling unassuming tourists bad tours just to make commission. Soon enough though we were reassured that we were going to be more than a taxi service as we began filling up the van with other tourists and we were on our way. 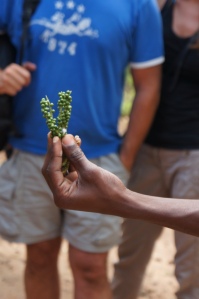 A short drive north of Stonetown and we were at our spice farm. The farm we visited was a display farm for tours, not a production farm. Either way, it was awesome! We touched, tasted, and smelled so many plants trying our best to guess what it was we were holding in our hands. Did you know that black pepper and white pepper are really the same thing, just different preparations? Did you know that cinnamon comes from a tree bark? All the while, some of the farm employees were following us around crafting all sorts of jewelry and other items out of palms. Between Ron in his palm inspired tie and me in my “sunglasses” and lipstick from the nutmeg plant, we were looking good. Almost as good as our wedding day! Following the tour, we sat down to a real spice lunch. Pretty much all of the spices we had learned about on the tour were in our dish. Whether or not some of them actually added to the flavor is still disputable, but the fact that it was scrumptous is not up for debate. It’s a good thing lunch was so tasty because afterwards we walked to a beach for some afternoon swimming in the crystal clear Zanzibar waters. Taking in the shimmering, blue waters and the bluffs lining the shore, we knew we were in a special kind of paradise! 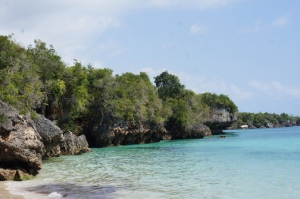 Check out the Full Gallery below:

3 thoughts on “The twisty turny streets of Zanzibar”