With our little car pointed South we headed back to the coast, over beautiful green mountains that reminded us of home.  Renting a car has proven to be one of our best decisions on this trip.  Without it, we would have missed so much.  We were driving what South Africans refer to as the Garden Route.  This lush, green section of highway cuts East from Cape Town all the way to Port Elizabeth.  Included in this area is a whole lot of incredible coastline.   We searched high and low for some good, long day hikes to explore.  Unfortunately, most of the parks here have put strict limits to the number of hikers for each of the most popular trails.  They also force you to follow their itineraries, which we found to be much to slow of a pace- maybe only 7 or 8 miles a day.

We did get the chance to check out the trail loop on Robberg Peninsula.   While not extremely hard or long, it did have some incredible sections that had us ooooohing and ahhhing.   Below the cliffs that we were hiking on we could see sea lions swimming in droves and could hear their barking calls resonating.  At the end of the peninsula  we dropped right down to the waves, walking among the rocks and then back up through a sand dune.  It was a beautiful place indeed.

From Robberg, we headed toward Storm River Village to stay the night.  Along the way we crossed a high bridge (~710 feet high) over the Bloukrans River.  From the road we could read signs claiming “Worlds Highest Bungee”.   Now jumping off of a bridge while attached to a big rubber band is not exactly my idea of a good time, however, Barbara decided that she had to give it a go.  After sleeping on the idea for the night, we found ourselves back at the bridge.  I stayed on solid ground manning the camera while Barbara donned a full body harness and walked out to the middle of the bridge.   Luckily the bar that I had posted up in had a live video feed so I could see Barbara work out her nerves as she waited to be the last jumper off the bridge.   She’s brave. She had no problem hurling herself off into the 710 feet of open air below.

She came back with that glowing-I’M-SO-EXCITED-Holy-Smokes-THAT-WAS-AWESOME smile on her face!  I love that face.
From the bridge we headed a bit further east to Tsitsikamma National Park.  We once again found ourselves a short day hike that at least got us to work up a little sweat.  We enjoyed a little lunch by the crashing blue water, and then hiked over the suspension bridges and up to the overlook point.   Somewhere we needed a to find a longer hike, but it was not meant to be here.

From the park, we headed to Port Elizabeth to meet up with my friend Madan.  Madan and I worked together 8 years ago while working at YMCA Camp Shady Brook.   We hadn’t seen each other in a couple of years, but since we met he has been invited me to come visit him in Port Elizabeth.  Finally, we had made it.   It we really great to catch up with an old friend!   He and his family invited into their homes with open arms.  His mother is an incredible cook, and kept us constantly full.  After dinner the first night, Madan took us over to his sister’s beautiful house for a great night of conversation.

Madan showed us around all of Port Elizabeth the next day.  The rain made for less than stellar views, but we still got to explore and just catch up.  We had an amazing lunch at one of South Africa’s newest microbreweries- Bridge Street Brewery.  The wine scene in South Africa is fantastic, but the beer here just can not compare.   The beer wasn’t bad per se, but they still have some work to do.
After saying a very early goodbye to Madan, we headed off for our (loooooong, but uneventful) 13 hour drive to our next destination: Drakensburg.  Drakensburg translates roughly to Dragons Mountain, and we were looking forward to finding some great trails here.  We were not disappointed!

Well maybe we were a little.   When we work up in the morning to head out for our hike to the top of Tugela Falls via the Ladders route, the entire area was socked in with thick clouds. Tugela Falls is the second highest waterfall in the world.  We still decided to give it a go, as we had a 2 hour drive to the trailhead and the weather can change fast in the mountains.  Getting to the trailhead was a feat in to itself.  The rental car we were given was a tiny, gas sipping Chevy Spark Lite.   Not exactly an off road beast, but that didnt stop us from crawling through the rocks, gulleys, trenches and mud up to the very top of the road.  The park ranger at the top seemed a bit taken back by our transportation.
We set off on the hike, cold breeze blowing and rain threatening.  We hoped that it would magically all disappear by the time we got up to the top.  We ascended the very well defined bottom section – there was a concrete path in sections (why they couldnt use this on the road boggles me).   But as we got higher, the trail got more exciting as is crawled it traversed around the high peaks.  Eventually we ended up at the bottom of the ladders.  Just as we approached the bottom of the ladders, groans of thunder began.  The clouds had not lifted, and the winds had only gotten stronger.   The combination of the poor conditions and the fact that this chain ladder was about 40 feet of sketchiness, made us decide that we would turn around.  There was no point in going up if we would not see anything.  Plus walking on a high peak in a lightning storm is something we like to avoid!   We retreated down the same route, bummed that we had not made it to see the falls, but still happy that we had been able to get outside and get some fresh air. 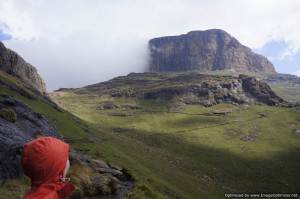 The next day we woke to incredible blue bird skies!   We had saved our bigger hike for this day- a proper day hike for us.   16 miles up to Cathedral Peak.  After a longer than expected drive to the trailhead, we parked the car, bought a map and set out.  This area is SPECTACULAR!  The grass covered mountains look like they are covered in a soft velvet.  As we climbed through the hot morning, we soaked in the amazing sunshine that had been missing for the last couple of days.  We gained the first bench (One Tree Hill, which lacked the tree), and walked up to the top of this odd, super-green stripe of grass that led us across the mountainside.  I think that the green stripe must have something to do with the underground water table here.  It was really something quite amazing- on one side of us it was quite dry, brown grass, and the other side was a lush, green grass. Hard to explain, but check out the photo.

We hiked at what we thought was a good pace, but somehow there were not going to be enough hours in the day for us to get to the top of the peak and back down and drive all the way to Jo’burg.  Even without making the peak, we were really happy with the hike, as it finally felt like we got in a solid workout.  So we decided to turn right at the junction and head back down to the car for the long late night drive to Johannesburg. 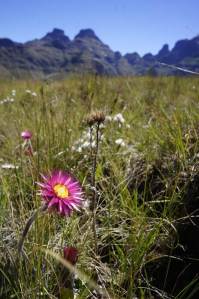 All in all, Drakensburg was absolutely stunning!  Hopefully somewhere down the road we can return to this incredible part of the country.  South Africa was so much more than we had expected!
Full Gallery: