After what can only be described as a very eventful yesterday, we woke up praying for good roads and easy riding. Unfortunately Vietnam did not get the memo and we were once again driving on some pretty atrocious roads. Bump. Bump. Swerve. Ouch. Repeat. That pretty much sums up the morning. Needing a short break from the drive, we stopped at a roadside stand for a quick snack. We felt really spoiled as we kicked back in their hammocks while we ate our goodies and mentally prepared to get after it yet again. With out break behind us, we boarded our beast of a bike and took off. We were pleasantly surprised as the roads smoothed out and we were able to do some cruising. Better late than never, right?
By the time we reached our lunch spot we were hungry, but in great spirits. Until…
“Do you have the wallet?”
“Ha ha! Very funny. How about that place?”
“No seriously. I’m not kidding. Do you have the wallet?”
“What? Are you serious? No, I don’t have the wallet.”
Apparently our luck from the last couple of days had run out. Lunch was abruptly put on hold as we retraced our steps. “The hammocks!” That was the only logical conclusion. Too bad that our little snack break was about 50 kilometers back making for an additional 100 kilometer round trip, and that was if it was even there. We both looked at each other and knew that neither of us had another 100 kilometers on the bike in us at that point. Decision made. Ron would take a taxi back there and I would wait in town with the bike.
While the woman at the shop I was waiting in front of was very sweet in offering me a chair and telling me that she loved me multiple times, I was starting to get both anxious and antsy after over 2.5 hours of waiting. In all fairness, Ron’s two plus hour ride with a taxi driver who could only speak Vietnamese was equally long, especially when it started off with hitting a dog. Thankfully though, it was worth the effort as Ron emerged victorious with wallet in hand! Phew! Close call! 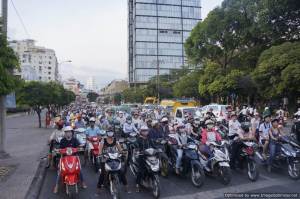 The rest of the drive to Ho Chi Minh was uneventful which was very nice seeing as we were both craving a little “boring” after the last 48 hours of craziness. As we entered the city limits, the traffic drastically increased. We hired a motorcycle taxi to guide us to the backpackers’ region of the city where we were wanting to stay for the night. Hiring that guided for a few dollars was one of the best decisions we could have possibly made. The roads were NUTS! We were literally shoulder to shoulder with what might have been hundreds of other motorcycles, buses, trucks, and cars all honking to make way for them. Our Ho Chi Minh baptism by fire included everything from driving on the sidewalks to squeezing by vehicles going the wrong way by the skin of our teeth. All we had to say was thank you Vietnam for preparing us for this madness! Whoa!
Having reached Ho Chi Minh, we only had a little more ground to cover before we were officially done motoring around this phenomenal country. The next morning was Mekong Delta or bust! We made it to Can Tho in the Mekong Delta region of Southern Vietnam with no problems. (I mean, come on. What did you expect? We are practically locals by this point. Not!) Can Tho is a fairly large city in the heart of the delta rich with life! Our big to do here was to witness the famous floating markets firsthand.

We were not too jazzed about the idea of boarding a boat of 20 or more tourists. We wanted the real deal so we were pretty excited to find a woman willing to take us out on her private boat extremely early in the morning so that we could reach the far market during its prime. (Bonus: it was far cheaper than any other options we had found.) She also made the lofty promise that we would not see any other tourists, which we took with a definite grain of salt. But she delivered!

It was incredible! We boarded our little boat in the dark and made our way down the river. After about 1.5 hours we reached the market. It was so neat! Small boats, side by side, crammed with colorful fruits and merchants tossing their wares back and forth, exchanging money for the goods. What was so interesting was how calm everything seemed. There was an air of peacefulness that was so refreshing after the “go, go, go” that essentially epitomizes the rest of Vietnam. No rush, just smiles. With no other tourists around, this truly felt like the Vietnam we had come to know and love. This was a priceless glimpse into these people’s reality and it was beautiful. 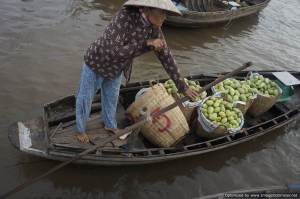 We left the market after a few hours and took the long way back through the small canals. This was fabulous! These small passages were lined with lush, tropical forest and the intermittent homes of the locals. We saw everything from a man building a boat by hand to people washing their clothes on the riverbank. I think that this when it really hit home that this river system is their whole life. It is everything they know and everything they need. This was truly one of the most authentic tours we had ever been on. Nothing felt contrived or overdone. It was just simple and real.

We stopped for a short walk through one of the villages and ventured to a small restaurant. This is only really worth mentioning because it was there that we met the most adorable little girl. She was about 1.5 years old and a total ham. Just a word to the wise…if you ever plan to open a restaurant, have a toddler deliver the bill. It makes people much happier to pay you.
With a short stop at a rice noodle making factory and a pass by the larger, more popular tourist floating market, our tour came to a close. What an incredible part of an amazing country! Heading back to Ho Chi Minh on our last big day of riding to sell our beloved motorcycle and finish up some last minute chores was definitely bittersweet. This has been an unforgettable adventure that we will cherish for the rest of our life. The people. The places. The bumps along the way, both literally and figuratively. They have all come together to weave such a rich story filled with fun, laughter, and a couple of bruises. Thank you Vietnam!
Now Thailand, do you think you can compete?