Despite the fact that our bus ride to Puno was pushing the 18 hour mark, it was extremely easy and comfortable so we really cannot complain. Busing through a country is such an awesome way to see the landscape and the people outside of the typical tourist track. We had a blast! 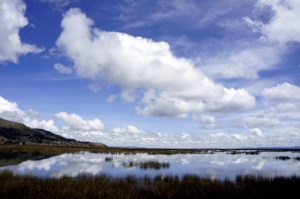 During the ride, we were laughing about the fact that we had literally done nothing but drive up. Well, I can tell you with confidence that when we got out of the bus in Puno, the home of lake Titicaca – the largest high alpine lake in the world, it would not have mattered if we were aware of our ascent during the drive or not because we would have been made aware of our elevation as soon as we exited the bus. Having spent the majority of this trip right around sea level, we were certainly feeling the effects of the high altitude. I mean, going from sea level to more than 12,000 feet was a bit of a shock to the system. Coming from Colorado, we had sort of forgotten what altitude feels like so maybe it was a good reality check when we got winded walking up a flight of stairs. Maybe… (Hopefully we will be fully acclimatized by the time we start the Inca Trail in a few days. Yikes!)

In no time at all we had rangled a tuk-tuk driver into giving us a ride to the center of town so that we could look for a place to stay. (Slim pickings, I must add but we did find something that had kind of hot water! Score!) Exploring Puno that evening, we fell in love with this lakeside town. For the first time in South America, this place just felt right. It felt like what we always imagine South America to be like. With women dressed in their vibrant traditional costumes (bowler hats balancing on the top of their heads and all) the streets were filled with unbelievable color. Kids running, grandparents strolling, vendors selling bread from their massive baskets smiling. Everyone seemed so relaxed; like they really knew what life was about. Forget stress and remember family, friends, and enjoyment. The cobblestone roads were absolutely alive!

The following morning we took a floating island tour on lake Titicaca. To preface, let me explain. Titicaca is filled with floating islands made of reeds. The ancestors of the people who inhabit these floating, manmade plots of land fled from Bolivia (part of this massive body of water is within the Bolivia borders as well) years and years ago. Originally, they lived on boats made of the lake’s plentiful supply of reeds, but as their population grew, they began to build these floating islands for their expanding community.

We joined a group of fellow travellers and boarded the boat that was to take us out into the vast waters of Lake Titicaca. (Seriously. This lake is huge! To lend just a little perspective, Lake Titicaca is bigger than the country of Puerto Rico!) Our tour took us to one of the closer islands, Uros. Uros is actually comprised of lots of little individual islands. Every family group has its own island on which several individual families reside. There is an island for the communitiy’s “hospital”, an island for the schools, and even separate little islands for the pigs. (No need for a pig pen when they are surrounded by water I suppose.) Having read reviews that described these tours as exploiting the people, we went into this with a grain of salt. 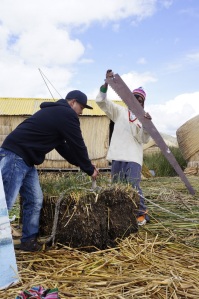 I’m happy to report that our tour far surpassed our expectations. We learned so much! The chief of the island we docked at explained how they make the islands. It was fascinating. Basically, they go out to the shallows and use a 6 feet saw to cut down into the soil of the prolific reeds. Once they make a cut they use a eucaliptys tree to make a wedge and then allow the water to do the rest of the work as it seeps in and breaks apart the soil into chucks that float. These chucks need to be at least 3 feet deep and 15 feet by 60 feet. That is huge! Once they have collected enough chucks of this floating soil, they manually bind them together until they grow together naturally. On top of the 3 feet of soil, they need 6 feet of dried reeds stacked in a crisscross pattern on top. These need to be replaced every couple of months so you can only imagine how much work it is to simply sustain their island, much less to keep with the all of the tasks and necessities everyday life demands. (They truly rely on Titicaca’s reeds for all aspects of their survival. It’s incredible!) Funny enough, the chief told us that should there be a disagreement on the island or if someone refused to do their fair share of work, they settled the argument by simply cutting a segment of the island free and setting them off on their own. Pretty entertaining to think about really. 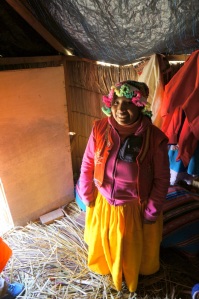 After our little lesson, one of the local ladies grabbed Ron and I. We followed as she led us into her reed hut home. It was tiny! With the rain storm we had on the mainland the other night, I cannot possibly imagine what the conditions would be out on a floating island made completely of reeds! Our little lady dressed us up in some of her clothes and paraded us out to look at some of her handicrafts. It was so much fun! She, along with the entire community of island dwellers, was so welcoming and friendly. They loved to share their story and background answering every question we could come up with. It was like this island was a bucket filled to the brim and overflowing with knowledge. We learned that Rhuematism is a common illness later in life due to the constant humidity. We learned that during the windy season, they actually relocate all of the islands closer to shore due to the 9 foot waves that are a common windy season side effect. But perhaps my favorite, was that we learned that the phrase “Hasta la vista babies” (their wording, not mine) was common knowledge worldwide.

Back on land, we spent the afternoon lazily browsing what Puno had to offer. In addition, we were on a hunt for a new battery wall charger. During this mission, we were reminded of just how poor our Spanish skills are. That being said, we have a good time trying our best…albeit most of our attempts are followed by, “Lo siento” meaning “I’m sorry”. Usually we get a smile or a hearty laugh in response which is alright by our book. The fact that most of the words we remember from Spanish class in school are less than helpful is not working in our favor. Words like “dress” and “beach” are not all that pertinant when asking for directions. Perhaps by the end of this trip we will regain a some semblence of communication skills. But until then it sure gives you an appreciation of people travelling to the US who do not know English, yet somehow we always expect them to understand us perfectly. (And if they don’t, we always repeat the same thing, but louder. I have never understood the reasoning behind that one 🙂 ) Ahhh…perspective!

Bright eyed and bushy tailed we hauled ourselves along with our packs to the bus station the next morning bound for Cuzco. We opted to take a tourist bus that made several stops along the drive. And we are sure glad we did! Our first stop was at a small museum off the road with lots of ceramics and old Incan mummies (hardly behind glass I might add). A few hours later we stopped for a couple photos at the highest point on our journey which was a pass just under 14,000 feet. A pass at nearly 14,000 feet! That is crazy! There are some terrifyingly massive mountains. A delicious Peruvian lunch at our third stop and we were on our way to a set of Incan ruins In Rachi. They were awesome! It is hard to imagine people a thousand years ago standing exactly where we were standing building these structures, ministering to the community’s needs, and living and thriving in that ancient environment. Wow! Our last stop was at a small chuch the Jesuits built over an Inca temple site after the Spanish conquest. The outside was pretty, but the inside was breathtaking! Guilded from top to bottom in pure 24 ct gold and covered from wall to wall in timeless paintings taking inspiration from everything from the Moorish style, the Inca’s belief system itself, and the traditional Baroque style of the time, it was stunning! An extremely interesting fusion of so many different cultures and backgrounds. This church pretty much sealed the deal…the tourist bus was a great choice for the day!

Despite the stops, the highlight of the day was no doubt the drive itself. Climbing huge passes and watching the sunlight play against the peaks covered in snow was magical. There were valleys, open fields, fabulous cloud formations, herds of llama and alpaca dotting the landscape, and menacing mountains surrounding us on all sides. I have to say, I expected Peru to be beautiful, but not to this scale. This is honestly one of the more spectacular landscapes I have ever seen. It is so vast and pure. It just makes you want to stop and soak it in and never leave. 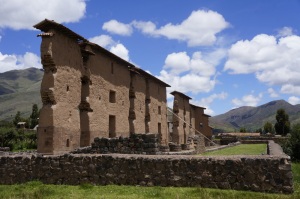 And we just made it to Cuzco!

Check out the full gallery here: